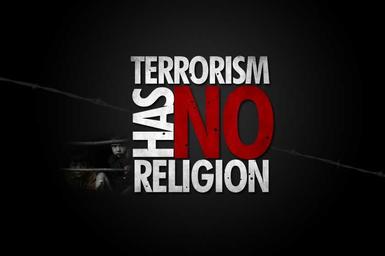 to achieve a political goal.

they receive, it can become difficult to remember this is a spiritual battle.

As the Body of Christ, we have been given the weapons to stop the injustice

dealt by these terrorist groups.  But it's not so much about the men and

women of the terrorist groups as it is the spirit that operates through them.

That is where the battle rages; in the spirit realm.  (Ephesians 6:12)

When God's people put their trust in Him and followed what He was saying, they always had victory.  No matter how big the opponent or how many of the enemy there were, God was always faithful to give victory to His people.

While there are many Scriptures that explain about Spiritual Warfare, I want to share two that I believe are critical to understand.

2 Corinthians 10:3-5 NLT
3 We are human, but we don’t wage war as humans do.
4 We use God’s mighty weapons, not worldly weapons, to knock down the strongholds of human reasoning and to destroy false arguments.
5 We destroy every proud obstacle that keeps people from knowing God. We capture their rebellious thoughts and teach them to obey Christ.

Ephesians 6:12 NKJV
For we do not wrestle against flesh and blood, but against principalities, against powers, against the rulers of the darkness of this age, against spiritual hosts of wickedness in the heavenly places.

While we are human, we have a Supernatural God who works through us.  Just as God worked through Moses, Elisha, David and Jehoshaphat, He is still working through His Body today...you and I.  Our prayers, intercession, going and obedience are weapons the enemy cannot stop.  When we arm ourselves with God's Word and speak it into the spirit realm, casualties are inflicted on the enemy.  The grip of terrorism and all forms of injustice are relinquished and surrendered by the enemy.

But understand, this is not a one time short-term mission trip or an hour of intercession a day.  This is something that takes people who will commit to standing in the gap.  It has to be sustained through prayer.

No matter how big the enemy is or how many of the enemy there are, God's victory is guaranteed and promised.  We need only be obedient.  Truly the Greater One lives in us.